From the archives of the town of Weiden in 1994:

The town had a “House as kitchen” built alongside the Untere Tor in 156, so the first inn was opened. After many changes of proprietors over the centuries the then owner “Mr. Johann Joseph Kellner, master butcher” was granted a license to serve home-brewed beer in 1865.

When this was generally forbidden for the citizens of Weiden in 1898, his son, Georg Kellner, invited beer brewer Iblaker to move his free brewery tavern into the house. Mr. Iblacker terminated this contract on July 1, 1907 since he wanted to run his own inn. Georg Kellner’s widow Maria now tried desperately to obtain her own publican’s license since she was living in “unfavourable pecuniary circumstances”. In August 1907, the former waiter and butcher Jakob Sperrer was granted a publican’s license, to which the widow Maria Kellner agreed. On 1.9.1909, Josef Wastian became the next landlord, followed by Eugen Röbl in March 1910 and Anton Müller in February 1911, though he only lasted one year.

On December 30, 1912, the property was purchased by Jakob Heigl , butcher and landlord from Schirmitz, who ran the inn with butcher’s shop himself as of February 5, 1913. When he was granted his publican’s license it was confirmed that he had a very good reputation and had already been running a tavern on the Obere Markt in Weiden for nine years “whereby he maintained law and order”. Since this time the ” Torbierstuebl “, the later Hotel am Tor and today’s ” Klassik Hotel am Tor ” has been the property of the Heigl family. 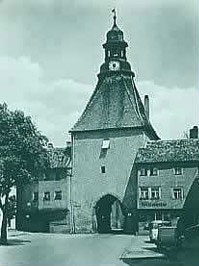 If you consent to these technologies, we may process data such as browsing behavior or unique IDs on this website.

If you do not give or withdraw your consent, certain features and functions may be affected.
Manage options Manage services Manage vendors Read more about these purposes
View preferences
{title} {title} {title}